Warning: file_get_contents(): http:// wrapper is disabled in the server configuration by allow_url_fopen=0 in /home/alannor3/public_html/estebanguitarpackage.com/wp-content/plugins/fast-easy-social-sharing/fasteasysocialsharing.php on line 34

Warning: file_get_contents(http://api.sharedcount.com/?url=https%3A%2F%2Festebanguitarpackage.com%2Fplay-guitar%2F20c-henze-el-cimarr%25C2%25A2n%2F&apikey=): failed to open stream: no suitable wrapper could be found in /home/alannor3/public_html/estebanguitarpackage.com/wp-content/plugins/fast-easy-social-sharing/fasteasysocialsharing.php on line 34 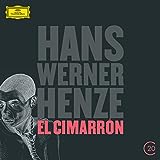 Add to cart
Amazon Price: $7.34 (as of March 17, 2020 6:02 am – Details). Product prices and availability are accurate as of the date/time indicated and are subject to change. Any price and availability information displayed on the Amazon site at the time of purchase will apply to the purchase of this product.

By the end of the 1960s, Hans Werner Henze was established as one of the leading operatic composers of his generation. But after the successful premiere of The Bassarids (Die Bassariden) at the 1966 Salzburg Festival, Henze decided to renounce opera (though he was to return to it eight years later with We Come to the River), and to take music theatre in a different direction.

In 1970, he told Peter Heyworth in an interview for The Observer (23 August 1970) that he couldnt possibly continue to write opera of that kind … I felt that I had become too accustomed to something maybe to myself? and that it was time to put myself and my work into question and to detach myself from certain social rituals.

What motivated this radical shift? The reasons were partly the result of Henzes personal and political convictions, above all his embracing of Marxism. As Henze told Heyworth, my crisis was not so much about opera as about music-making and people. But there were also compelling musical reasons: after 20 years of writing for the human voice in relatively conventional ways, Henze felt the need to take its expressive possibilities further, and to develop a greatly expanded vocal style.

One of the first works to demonstrate his new approach was El Cimarron, first performed at the Aldeburgh Festival (at Brittens invitation) on 22 June 1970. Subtitled a Recital for four musicians El Cimarron is scored for solo baritone (or, as Henze put it, a baritone who usually behaves like one, but who also has a very large range, stretching from deep notes … to a kind of zany tenor voice on top), with flute, guitar and percussion. The text is drawn from The Biography of a Runaway Slave (1966) by Miguel Barnet from interviews with Esteban Montejo, who, at the age of 103, was almost certainly the only surviving runaway slave (cimarron) on the island of Cuba. His tale is an extraordinary one, and his testimony is both harrowing and inspiring.